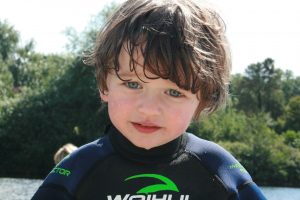 In November 2016 three year old Drew Barker-Wright was diagnosed with Chordoma, a rare type of cancer that occurs in the skull base and spine. He was admitted to Oncology at Birmingham Children’s Hospital where he began intensive chemotherapy and surgery.

Drew’s journey was fraught with complications from the outset. This was primarily due to the rareness of his cancer and the lack of documented cases. After numerous efforts to save his life, Drew slipped into a coma and his parents were told that nothing more could be done. On the morning of February 24th 2017, Drew took his last breath at home with mummy and daddy. His battle was brief and brutal but, bravely fought for one so young.

In Drew’s memory, his parents have founded a charity in his name. Its aim; to fund research and support families affected by Paediatric Chordoma.

Drew’s charity is the first in the UK to address Paediatric Chordoma and his parents hope to build a lasting legacy for their little man.